Before WOCCU There Was CUNA International

In the September 1970 issue of Credit Union Quest, the journal of the NSW Credit Union League, there was a small announcement on Page 6 titled “World Body” which is reproduced here. 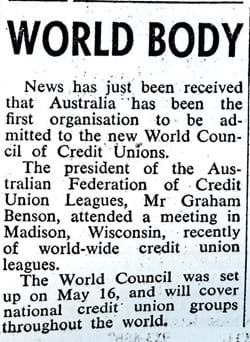 A further article in Credit Union Quest in December of 1970 noted that “The World Council was formed to more effectively meet the needs of credit unions in a changing world”. The piece goes on to quote a group statement by the Directors of the World Council of Credit Unions (WOCCU):

In the past two years alone credit unions have been established in England, Scotland, Africa, India, Japan, the Philippines and Indonesia. It is in this area of development that we see the World Council playing a most significant role.

In the field of legislation it is very apparent that legislators are looking at the credit union laws of other countries when seeking a pattern for their own policies.

WOCCU officially began operations in January 1971, a time of strong growth for credit unions in Australia and around the world. In Australia, credit unions took off after World War II, a time of need but also optimism and collective spirit. In the US during the Depression, Franklin D. Roosevelt’s administration’s New Deal undertook large public programs and progressive legislation including the Federal Credit Union Act.

In their recent history of CUFA (CUFA 50 Years) Greg Patmore and Mark Westcott wrote about how the supercharging of credit union development in the US affected the global movement:

Following the Second World War both the US and Canadian credit union movements took a strong  interest in promoting credit unions through the world, seeing their form of economic democracy as part of the struggle for a more democratic world in the Cold War. CUNA established in 1954 a World Extension Division to assist emerging national movements and became CUNA International in 1964.

In 1990, Richard Raxworthy recorded an oral history interview with Ken Miller who, among other things, was a Director of WOCCU. He was a participant in the discussions around dismantling the US based CUNA International and creating WOCCU in its stead.

We felt that the international group should not be able to vote on domestic issues of American credit unions and that if international people were to become involved there should be a separate organisation which would be worldwide and which would not be totally dominated by the US. It should be worldwide in its own right. We’d talk about this and we’d find that there were many people who were responsive to it and agreed with us.

When I went back in 1968 we’d decided that we’d do something a bit more positive about that and so we wrote a paper that we took over and circulated among all the delegates to the 1968 meeting about the reason we saw that there should be an international organisation, not solely because of that paper but there were a number of other people who started to think along these lines and so it started to develop towards a World Society of Credit Unions.

While in hindsight it might be thought that CUNA International was merely the testing ground for WOCCU, the group did make significant contributions in its own right. CUNA International provided fledgling national credit union movements with financial and philosophical expertise as well as much needed funds.

They also collected and disseminated statistics on credit union development and operations around the world, something that WOCCU is thankfully still doing today. CUNA International produced an annual International Credit Union Yearbook during its short lifespan. Australian Mutuals History hold a number of these in our collection and they are a great resource. For example, the 1967 Yearbook (pictured below), published statistics on credit unions in 75 countries. 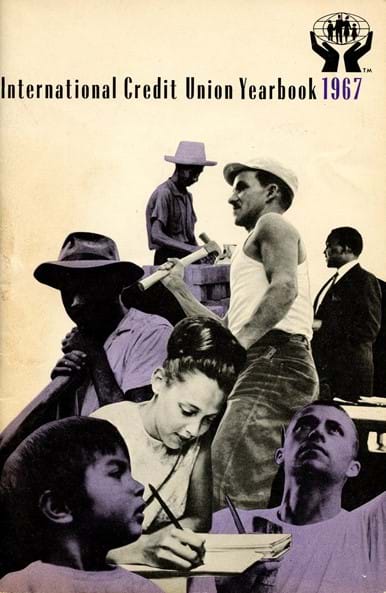