Kevin Joseph Yates is widely considered responsible for the introduction of Credit Unions to Australia. He was born on 7 December 1911. As a young man he was employed in the family business ‘Yates City Night Patrol’ (now Yates Security) and he was introduced to co-operative ideals through the Campion Movement and later he joined Co-Operative Services Limited.

He enlisted in the Royal Australian Air Force to serve in the second World War on 20 June 1942. By the end of the war he was a warrant officer in the 186 Squadron. He was discharged from the Air Force on 19 February 1946. During his war service he observed the credit union movement in Canada

On return from the War he continued his interest in co-operatives and was responsible for the formation of the first Australian Credit Union – the Catholic Thrift and Loan Co-operative on 4 October 1946. 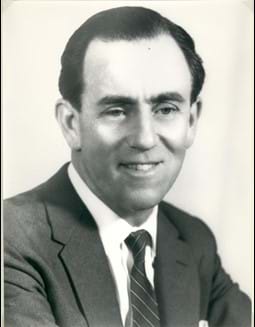 The Co-operative was renamed Universal Credit Union Co-operative on 29 April 1948. Following the establishment of Universal he visited many Catholic parishes encouraging them to commence credit unions and had some degree of success. He agitated for the establishment of an association of Credit Unions for many years before the Savings and Loans Association Co-Operative was established in September 1956. This was re-named New South Wales Credit Union League Co-Operative Limited in 1958. Kevin Yates was elected the first National Director of the ’League’ in 1959 and attended the CUNA National Meeting in Boston that year. He remained on the Board of the NSW South Wales Credit Union League Co-Operative Ltd until 1962 and served again in 1967. He was also Deputy Chairman of Universal Credit Union from 1969 - 1971 and a director from 1972 until 1974 when an Honorary Life Directorate was bestowed upon him.

Kevin Yates was a strong believer in education to promote the credit union cause and in 1966 collaborated with John O’Hara of the Sydney Morning Herald and Tom Kelly of Universal Credit union to commence Credit Union Quest – quarterly newspaper that espoused the cause and continued until 1973.

By mid 1974 he had come to believe that the future of the credit union movement lay in large mutual credit unions that enabled every person in regular employment to belong to a credit union.

The Kevin Yates Personal Service Award was instituted in 1974 in the Universal Credit Union for members of Group Committees who performed outstanding community service in the credit union context. He was elected Founding President of the Credit Union Historical Co-Operative in 1985.

In addition to his work in the Credit Union movement Kevin Yates was also Secretary of the Co-Operative Institute of New South Wales and a founder of the Australian Consumers Association (now trading as ‘CHOICE’) that was established in 1960 and a Director of the Air Force Club. 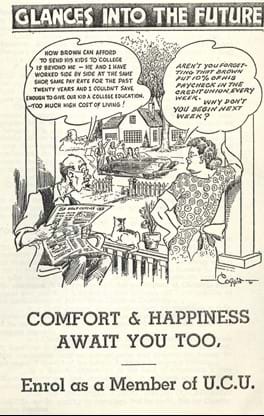 Kevin Yates died on 25 March 1987. The Australian Credit Union Historical Co-Operative Ltd established a Kevin Yates award in the same year for persons who had given exceptional voluntary service to the Credit Union Movement .

Keith Young, a fellow founder of the ‘League’, described Kevin Yates as "unselfish, devoted and dedicated, with a deep religious conviction and concern for his fellow man".

Kevin Yates provided an oral history interview for the credit union movement in 1984 when he was interviewed by Gary Lewis.

We have restarted our Oral History Program with a recorded interview with long time servant of Qudos Bank, Gary Halliday. Our oral history collection is one of our most important assets (learn more

Histories & CPS’ the Morality of Money

One of the most important uses of our resources and knowledge is for the production of credit union and mutual bank history books. Many of these have been produced with our help over the years,

Here is the latest edition of the Archives Newsletter